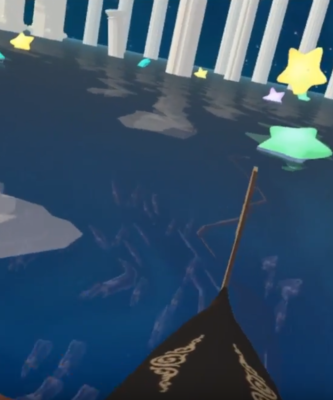 Paint The Sky borrows the idea from Academy Award Nominee La Luna(2011) and sets players in a boat to collect stars fallen from the sky. The scene is filled with Greek style architecture and pillars (Ionic columns and Doric columns), fishes and dolphins. After touching a star floating on the water, the star transforms several star pieces and the player can paint it to the sky by lift the stars. After collecting 7 stars, a giant rotating star will spawn in the center of the scene waiting for the player to touch, and once it’s reached, a whale jumps out of the water, adding a dramatic ending to the game.

The sky-painting mechanics is discovered by doing playtest. During several playtest sessions before interim, we found out that playtesters would try to bounce the star pieces using the paddle during gameplay, which inspired us to add the feature to the game. However, since BVW round 2 is about indirect control and naive guest who never played game before, the interaction is optional for finishing the game.

My contribution to the project includes 3D models of the paddle, the original boat, fish and the dolphin. The pavillion is also built upon my colleague’s work by me.