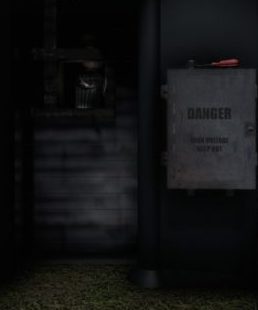 BVW Round 4, aka. the Story Round, is the biggest challenge I have met in the class so far because building a short, narrative drive game under two weeks is never an easy work.

Our game was firstly inspired by The Boy in the Striped Pajamas (2008) and we decided to utilize Oculus Touch Controller’s unique gesture recognition feature for input. The decision surely helps our game elevate the immersion and we are surprised by how well it fit the theme. The game is set in the night and I found an Youtube video (https://www.youtube.com/watch?v=H5v_X1k02U0) for adding volumetric lighting into Unity3D game project. The volumetric lighting used in alarm and flashlights makes not only the world more believable, but also the game progress more intense. There are some bugs in the end, unfortunately, remaining unfixed.

I designed the game to utilize Oculus Touch’s unique gesture feature as the main interaction between the player and the kid in game: the player gives signal to guide the help avoid guards’ patrol. During the later part of the game, The player is also required for throwing rocks to distract and knock down guards.

I modeled the most of the environment and the guard. Me and the other artist decide to use harden edges during modelling the guards and the boys, giving a more intense feeling toward player.

My Name is Joseph is awarded Jury Selection of ETC Festival 2017.